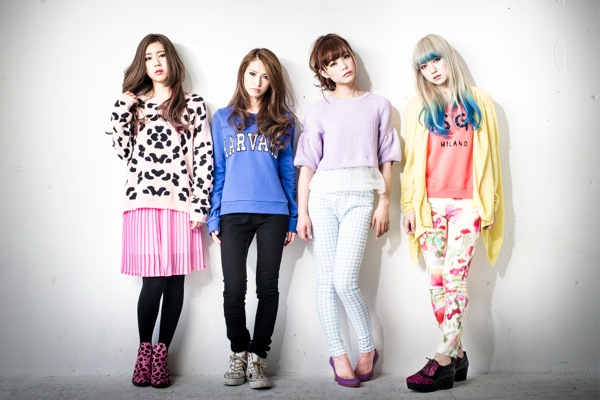 SCANDAL has been interviewed by Japanese entertainment site BARKS about the release of their latest single “Departure.” Here is part one of the interview.

On 4/23 SCANDAL will release their 18th single 「Departure」. On 3/3 they uploaded this same song in a guerrilla-type style on YouTube for one day only. 3/3 is a profound day that SCANDAL holds fondly: on this day they had their indie debut, and their large dream of playing a one-man live at Osaka-Jo Hall.

MAMI, who wrote the lyrics and composition, says, 「I’m glad that we were able to do a song for this precious season」. The sound that was produced while thinking of spring gives a dramatic arrangement through strings, but that penetrating basis is a sad, medium-tone melody that’s in the ensemble of the 4 who are full of the sense of a band. Furthermore, all of the members were deeply involved in recording the music production of the B-side song 「Rainy」 . On the same single are two new songs with lyrics and music completely written by SCANDAL, which is a first for them. 「Departure」 is a single with artwork featuring the 4 members continuing to spread out while being solid and unified. I would like to deliver a long interview with secret stories about this work.

──You made your new song 「Departure」 public on YouTube on 3/3.

HARUNA: Because 3/3 is a precious day for us we were completing it until that day, and we were able to send it out to everyone waiting. Since I was focused on my play performance (Gineiden) when 2014 began, the 3 other members were constantly continuing to work on songs while SCANDAL couldn’t play lives. Of course, while I was busy with the play, I participated in pre-production and listened to songs. Among those was this song that was created by MAMI. Even though there were other songs, we all agreed to try completing this song.

MAMI: It also appears in the lyrics, but this song’s image is one large cherry blossom tree in bloom in a nearby shopping district. I wrote the lyrics while imagining a story from that scenery.

──Did you write the lyrics before the melody?

MAMI: They were written about the same time. The melody came out together with the lyrics. It was winter when I began to work on it. I wasn’t particularly trying to write a spring theme at the time, and what came forth was an impulse. But, when I thought about it, 3/3 is the day we had our indie debut and also the day that we played our first live at Osaka-Jo Hall. Spring has become a core season for the band. I’m glad we were able to write a song for this precious season.

──It seems like there was a tremendous reaction from the fans after it was released on YouTube.

MAMI: The 4 of us hadn’t really been active when 2014 began. We felt like really pleasing everyone with a 「Long time no see!」 surprise from SCANDAL. It turned out to be a huge thing on Twitter as well (laughs). We heard comments like “It’s a waste to have it up for only one day,” “I want to listen to it more,” “I want to listen to it properly” not only on Twitter, but also on the radio as well. We unexpectedly caused a big reaction on the USEN request charts. Because there were voices who wanted it, we were able to make this into a single. That makes us very happy.

HARUNA: Firstly, we got to talk to Kameda-san about how we want to complete songs with only our own sound. We cherish it even now, and because we always have lives in mind when working on songs, we wondered if putting in sounds other than ours would be somehow different. But on the other hand, we also said, 「If Kameda-san listens to this song and has ideas to make it even better, please keep giving us advice」.

──So, when string sounds are put into a sad melody, a song’s image could be pulled in that direction. 「Departure」 has a band sound of the 4 of you pushed to the front.

HARUNA: After we finished recording, Kameda-san said, 「Everyone’s so fixated on the band sound. That was a wonderful pressure because I kept reminding you over and over (laughs)」 (laughs).

──Kameda-san is also in a band, and I’m sure he understood your feelings.

RINA: That’s right. When we were recording drums, I created the sounds with a drum set I also use for lives. Kameda-san listened to that and gave me advice such as, “It’d be better if the tom, snare, and kick drums were muted a little bit.” Although I always use an 14-inch hi-hat, I went up a size and used a 15-inch one for this recording, which gave it a gritty feeling. That was unexpected. I thought that a bit of a submerged feeling was good.

──However, the band-feeling is stronger than the presence of the hi-hat.

RINA: Yes. I wondered if it was too strong when I was hitting it, and wondered if it was okay or not. But, because the strings add to the actual sound, a strong sound like that didn’t feel out of place at all. Rather, I thought it was cool. It was a new discovery. As for the melody, there are 4 kicks, and it was important to always keep suppressing it while I was stepping on it. So, in fact, when I tried listening to it, the muted kick sound was always easy to listen to.

──Kameda-san is a bassist. Being a fellow bassist, what kinds of conversations did you have with him?

TOMOMI: Well……Kameda-san tried playing my own bass, and he said, 「The string height is high」 (laughs). It seems like Kameda-san sets his string height low. We had conversations like, 「I have my strings high to match how I play, and I do it like that because I like the graininess」. For recording, my usual bass is slightly distorted. But, for this recording, my Precision bass was equipped with a PJ-type pickup. Because the output is high I thought that the natural sound as it is would be good, and I tried it out. Then, we used it as it is because that was the one that came out most nicely. As for the phrases, I was pretty much free to do whatever I wanted. There was a 「Play it as you like」 feeling.

──In a sense, is choosing and recording each sound one-by-one completely different from how Yasutaka Nakata-san produces?

RINA: Yes, it’s the complete opposite. Kameda-san is like, 「What if we take out one sound here?」 and judges at the end. That’s why we didn’t get lost with having too much freedom.

──Did the guitars have quite a bit of freedom too?

MAMI: When I was creating the song, I had a “make it simple” theme in my head. So, I handed over what I had quietly made at home to Kameda-san and he arranged it……when he returned it, the guitar arrangement hadn’t changed at all. He added synth and strings, and it was like he added a single note that was like rain. I was surprised that what I play wasn’t subtracted, and I was happy that he respected me.

──Have you improved as a [guitar] player?

MAMI: I have. Because I inwardly expected that parts like the first A-melody, the first B-melody, the first hook, and fillers might suddenly change completely, it was superfluous. I’ve gotten confident in my way of thinking being okay. It’s just that the tone has changed. I thought that the tone of a regular main distortion was good, but when I was considering the whole song, Kameda-san explained that a slight crunch is good. There are many ways to play octaves and sounds with backing and thickness, so I reduced the distortion as to not overlap it. The strings weaving through that interval is very comfortable and neither sound gets in the way of the other. I felt that once more when I listened to the final version.

HARUNA: That’s right. I also used a crunch tone with my usual live effector system. It was kind of always like, “How much is this going to distort?” (laughs). Sometimes a sound’s features disappear when distorting. But, this time, since I could really hear the rhythm guitar sound……I felt a little embarrassed after all this time (laughs).

──A guitarist that’s embarrassed to hear themselves is unusual (laughs). How long have you been recording like this (laughs)?

HARUNA: Hehehe (laughs). This time, the sound of a new me–or rather, with the creation of this song, I feel that SCANDAL’s world of sound is growing. 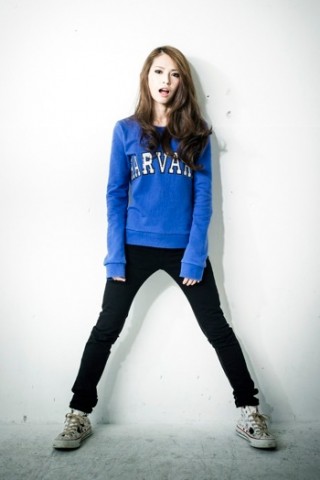 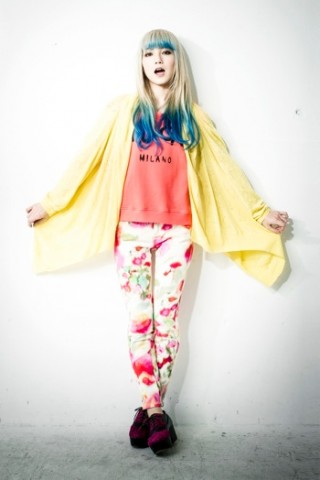