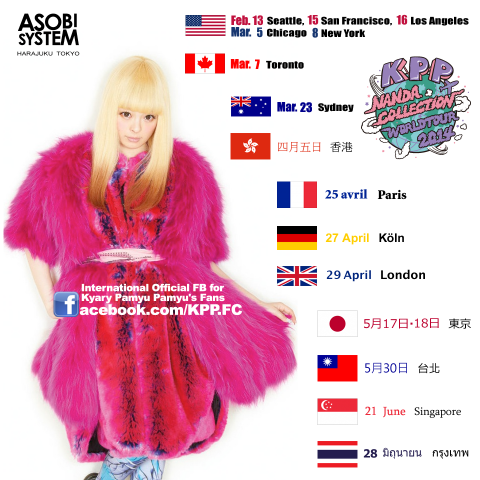 “Kawaii Ambassador of Harajuku” and J-pop superstar Kyary Pamyu Pamyu concluded her 2-day solo concert at Yokohama Arena with a surprise announcement, revealing the remaining concert schedule for her KPP Nanda Collection World Tour 2014.It was announced back in September that Kyary Pamyu Pamyu would be setting off on her 2nd World Tour which, at the time, only mentioned her planned stops across North America.

The new full schedule reveals that KPP’s upcoming world tour will have her visiting countries both old and new to her. Along with familiar venues in the U.S., Europe, and Asia, this tour will mark her first performances in Canada, Germany and Australia, much to the delight of the fans who were unable to see her in their country in 2013.

Stay tuned for more info! and…