KIDS ON THE SLOPE PREMIERS ON NEON ALLEY 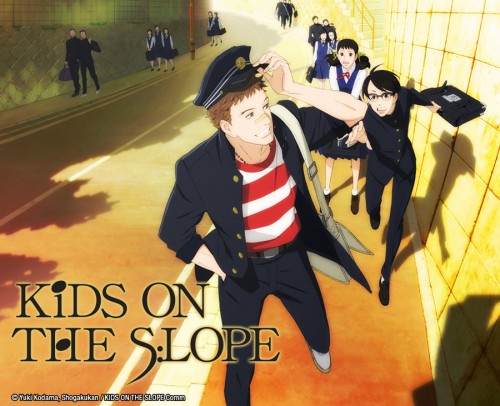 KIDS ON THE SLOPE, a series by the acclaimed team behind Cowboy Bebop, launches on the 24/7 digital anime channel, Neon Alley this Friday. The series follows a group of young jazz musicians in 60s era Japan.

Neon Alley announces a very special mid-season anime series debut with the launch of KIDS ON THE SLOPE on Friday, January 17th at 9:30pm (PST).

The 12-episode anime drama about a group of young Japanese jazz musicians originally aired in Japan as a part of the prestigious ‘noitaminA’ block on Fuji TV, is rated ‘TV-14,’ and new installments will debut every Friday. KIDS ON THE SLOPE is distributed in North America by Sentai Filmworks.

Get ready to be blown away as the acclaimed team behind COWBOY BEBOP reunites for a tale of life, love, and all that jazz in KIDS ON THE SLOPE! Set during the summer of 1966 and based on a popular manga series created by Yuki Kodama, KIDS ON THE SLOPE! is the story of High school freshman Kaoru Nishimi struggling to adjust to the latest of many moves in his young life – this time to his uncle’s home in the seaside town of Kyushu. It’s never easy adjusting. But this time will be different. This time he’ll meet friends who’ll change his life forever. And he’ll discover a new passion, one that grabs his heart and rocks him to his very soul. It’s called JAZZ, and together with bad boy Sentaro and music store girl Ritsuko, they’re going to follow their muse to wherever the music takes them!

“KIDS ON THE SLOPE is a rich character-driven drama that demonstrates the power that music has to dramatically alter lives, and we’re very excited to bring it to North American fans on Neon Alley,” says Charlene Ingram, Senior Animation Marketing Manager. “Directed by Shinichiro Watanabe of Cowboy Bebopand Space Dandy fame, the series wonderfully captures the look and sound of 60s era Japan. Watanabe reunites with acclaimed Cowboy Bebop composer Yoko Kanno, who creates a rich and textured jazz soundtrack for this dynamic new musical drama. We invite fans to catch the mesmerizing premiere!”

Neon Alley is VIZ Media’s innovative 24-hour English-dubbed linear anime channel that is available for general web access as well as for the Xbox 360® and Xbox LIVE® and the PlayStation®3 (PS3™) gaming system and the PlayStation®Network. Fans can also take advantage of the platform’s Video-On Demand “Catch Up” option which offers the flexibility to watch shows such as KIDS ON THE SLOPE anytime. The “Catch Up” option also allows viewers to search for specific content by individual series or by latest additions.