Ramen super fan and blogger Keizo Shimamoto tells his story about how his obsession with ramen brought him to Japan where he now runs a ramen shop of his own.

This insirping tale about following your passion as well as your tastebuds is a 7 minute and 30 second short that won the award for Best Short at the NYC Food Film Festival in 2012. If you love ramen or inspiring tales about cool people doing cool things, this is a must watch film. 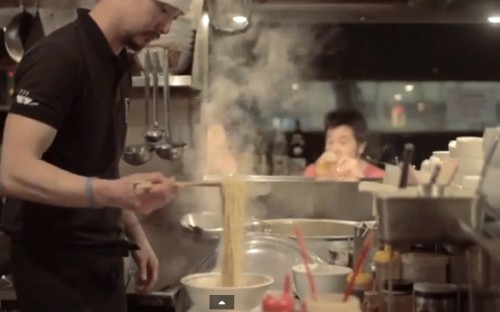 Director Michael McAteer met Keizo Shimamoto in 2010 over a steaming bowl of Keizo’s now infamous ramen.  On one side of the counter, an American film maker born and raised in Japan, on the other, an LA raised ramen freak in a Japanese body… A body, as would later become clear, that was almost entirely made of ramen.

The idea for the film was conceived almost immediately, and inched closer to reality as the relationship between director and chef grew.  But it would take the addition of another critical ingredient to turn the dream into life: rapper KM$.

KM$, who is actually Keizo’s cousin, grew up in Japan with Keizo sending him tapes of the latest underground hiphop coming out of LA.  Now a major force in Tokyo’s hiphop scene, KM$ and his group Takarabune provided the perfect audio landscape for the film.

Food, Film and Music.  Three guys and their passions came together in a testament to the power of dreams.”