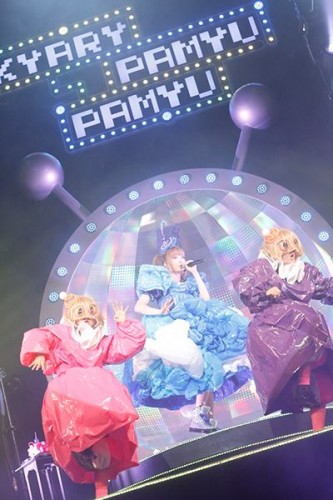 Kyary mentions that tickets for her North American stops (USA & Canada) will be presold on September 12 from 10am to 10pm local time on her official website. Use the password “”CANDY” to get your presale tickets. General ticket sales begin on Septmber 13 at noon, local time. I’m going to assume local time means Eastern time since she might not realize that we have 4 time zones. VIP and Meet and Greet tickets will be available as well.

The following information is reposted from KPP’s Official International Facebook:

The next year’s world tour and the release of a new song was formally announced by Warner Music Japan today September 7.

“The 100% Kyary Pamyu Pamyu WORLD TOUR 2013” which started last February was a great success. The tour featured 13 shows in 8 cities throughout Europe, the United States and Asia.

Her latest album “Nanda Collection” peaked to No-1 on the ORICON WEEKLY CHART and represents Kyary’s first No.1 album on the chart. This album was also released on iTunes in 111 countries and went on to become the No-1 album in Japan and ranked on the Electronic album chart in 23 countries.

Kyary is just going her own way and becoming a huge success. Kyary is going to start her “Nanda Collection Tour” 〜Kyary Pamyu Pamyu’s Universal Theater〜 on September 7th with 23 shows at 21 different venues to mobilize 500,000 fans.

She is also going to announce her new single at her first show in Kanagawa Prefecture. She will also reveal the schedule of her 2nd North American tour.

After North America, the world tour is off to London, France, Taiwan, Korea, Singapore, Thailand and Japan.

Stay tuned for more info! and…