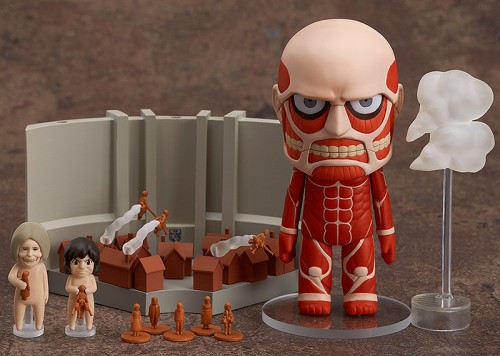 Good Smile Company has just announced their newest Nendoroid and this time it’s not one of a cute moe character like they usually are. It’s actually a terrifying character from the anime series Attack On Titian (進撃の巨人, Shingeki no Kyojin). The Nendoroid Colossal Titan & Attack on Titan Playset comes with multiple faces including one more accurate to the anime and a cuter chibi version as well. This Nendoroid stands a part from the others in the series in that this guy comes with a part of a town, its wall as well as smaller class Titans, little villagers, and the town’s defenders (and very cool clouds of steam).

In the anime, Colossal Titan is a super scary guy, but this Nendoroid version of him is strangely cute however. There’s no doubt that he will be snapped up by collectors. We just hope that he can play along nicely with the other Nendoroids in the collection.

You can preorder yours now for ¥4,800 until August 28th at this link: http://goodsmile-global.ecq.sc/gscnenwd00360.html